The Ghana Meteorological Agency (GMet) has said the 2020 major rainy season will start from March and will last till June 2020.

It said the prediction is based on observations of conditions on land and ocean as well as outputs from major world forecast centers like the International Research Institute for Climate and Society (IRI), Climate Prediction Centre (NCEP-CPC), the European Centre for Medium-Range Weather Forecast (ECMWF), UK Met Office and Meteo France.

Within the season, GMet predicts that there will be slightly longer days of no rain.

“March, April, May and June is the major rainfall season for the south of the country 8°N and below as well the Gulf of Guinea coast. At the peak of the MAM/AMJ season, there is a high probability of heavy rains accompanied by strong winds and lightning which could lead to localized floods. There is also a high probability of experiencing relatively long dry spells at the beginning and towards the end of the season,” it said in the forecast.

Noting that the onset of rains will commence on different dates within the period, GMet said areas within the forest zone will see rains much earlier than other parts of the country. 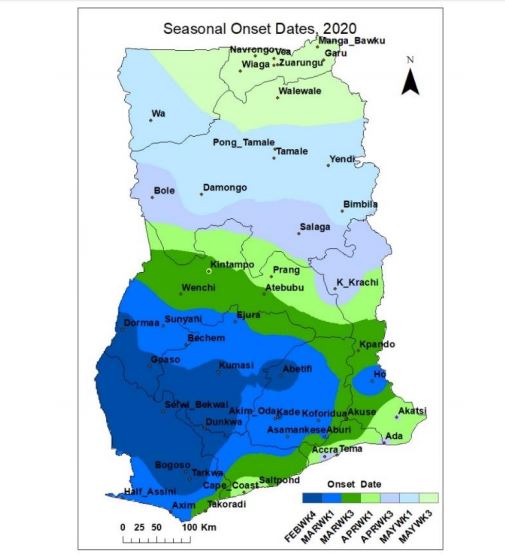 The Upper West will have the rainy season starting between the third week of April and the first week of May while the Upper East area will be the last in the country to get into the rainy season.

The season starts between the fourth week of April and the second week of May.

The Meteo agency indicated that due to the potential of flood in some parts of the country, organizations responsible for disaster management must consider relocating persons living in flood-prone areas while the public is sensitized about the “impending danger.”

It said, “the Municipal and Metropolitan authorities and the National disaster Agency are advised to put in place the necessary measures to ensure communities and livelihoods are safeguarded…Provide emergency/temporal sites for the victims and “ensure the Control/maintenance of dams and road infrastructure.”

It also called for the harvesting of rainwater and efforts made to store enough food.

GMet also called on Municipal and Metropolitan and District Assemblies to “desilt the drains before the rains set in to avoid water due to surface runoff that leads to flash flooding.”