McDonald’s will switch to take-aways and drive-thrus only as Tesco is expected to announce all its 24-hour stores will from tonight close at 10pm.

In a statement, chief executive Paul Pomroy wrote: ‘Our restaurants will remain open for as long as it is safe to do so.

‘In the last 24 hours it has become clear that we need to temporarily change our operations to ensure the wellbeing of our employees and customers consistent with the Government’s guidance on social distancing.

‘Therefore from 5am tomorrow (Wednesday) morning all restaurants will close seating areas and temporarily move to being takeaway, drive-thru and McDelivery only.’ 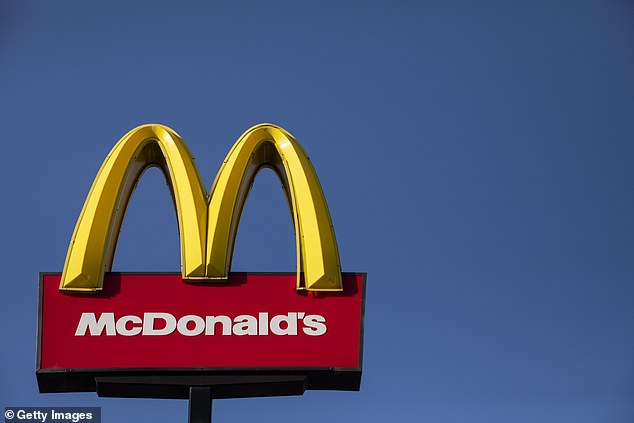 He added that all orders placed through Uber Eats and Just Eat would be ‘contact-free, with no physical contact between customers, employees and couriers, wherever possible’.

Workers in the emergency services and health and social care sectors will receive free drinks on presentation of their work pass.

The chain’s annual Monopoly promotion is being paused until later in the year, the company added.

Mr Pomroy said: ‘This year’s prizes include a number of luxury holidays, European city breaks and cruises which will have all been impacted by current and ongoing restrictions on international travel.

‘Following conversations with our suppliers and prize partners, we feel it is appropriate to delay the promotion until later this year.’

Bosses at the UK’s biggest supermarket have decided the stores will reopen at 6am on Wednesday morning, after facing huge demand from customers.

They will continue to open between 6am and 10pm for the immediate future, it is understood.

Supermarkets have been inundated by shoppers causing shortages in certain key items such as pasta and toilet roll, despite government advice saying people should not panic buy.

On Sunday, the food industry appealed to shoppers to stop panic buying, but today shelves were stripped bare of items such as eggs and chicken, while freezer chests were emptied.

Staff in Tesco stores were informed on Tuesday afternoon of the changes. A source said there would be no cut in pay for staff.

A Tesco spokesman said: ‘We are changing these store hours to ensure we can serve customers better at this time. It gives our colleagues the time overnight to restock the store, replenish the shelves and support our online grocery service at a time when demand is high.’

Details are being updated online with new store opening times, and it is believed some larger 24-hour stores that have pharmacies will remain open beyond 10pm.

The decision comes as the Government announced a business rates holiday for all retailers and the leisure industry.

Earlier on Tuesday, Morrisons revealed a series of packages to protect staff and announce an expansion of its online operations – including 3,500 new jobs. 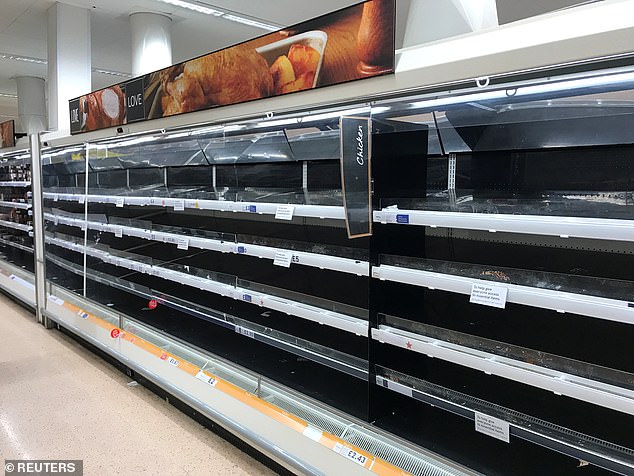 Supermarkets have seen a surge in shoppers stocking up on essentials, and said supply chains are working well. However, there have been reports of abuse aimed at staff.

Earlier today Tesco introduced restrictions to certain items today such as anti-bacterial wipes, dried pasta and toilet roll will be limited to two per customer under the changes, it is understood.

The company also had to remove a food bank trolley from its Hove superstore after a customer reported it had been raided.

A number of stores are now operating at reduced hours due to ‘operational reasons’, Tesco said on Twitter.

It comes as photographs showed supermarket shelves across the UK cleared of food and other essential goods such as toilet roll.

The demand for groceries has also moved online, with customers placed in hour-long queues on Tuesday just to access online supermarket Ocado’s website. 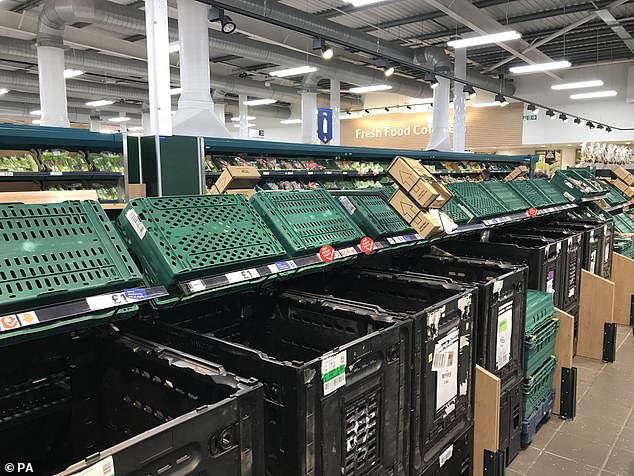 The company said it was experiencing an ‘unusual’ and ‘very high’ demand for its services, resulting in it having to take its mobile app offline temporarily.

Waitrose’s website was also temporarily down on Tuesday afternoon due to a ‘high volume of visitors’.

The Association of Convenience Stores (ACS) said its members, which include independent corner shops, Spar and Co-op, were managing to keep up with demand.

ACS’s head of communications Chris Noice said: ‘People are now realising that the place where there is still stock is their local shop.

He said while some stores already use delivery services such as Deliveroo, ‘more and more’ are now considering using their own vehicles to supply customers.

Despite Tesco tightening its restrictions from five items to two on certain products, the company insisted that stock levels remained ‘good’.

Responding to a customer on Twitter who asked why one of its 24-hour stores was closing at 10pm, the company said a ‘few’ of its supermarkets would be temporarily operating on reduced hours.

Following reports that items were stolen from its Hove store food bank trolley, the company asked customers to provide any further donations to checkout staff.

Supermarket giant Morrisons said it would be creating 3,500 new jobs as it expands its home delivery service to cope with soaring demand.

The chain said it would be recruiting around 2,500 pickers and drivers and about 1,000 people to work in distribution centres.

The move to boost home delivery will see the retailer make more slots available to customers, use another 100 stores for shop picking, set up a call centre for those without access to online shopping and launch a new range of simple-to-order food parcels from March 23.