Social distancing rules will last at least into the summer, health official says

A top Health Ministry official warned that the country’s effective lockdown is expected to last at least until the summer, and could get worse before it gets better.

Dr. Tal Brosh-Nissimov, a top epidemiologist helping to determine Israel’s response to the coronavirus pandemic, told Kan Radio on Sunday that health officials “expect a lot more sick in the near future, including serious ones. We have to be ready for critically ill and for deaths in the coming days.”

Brosh-Nissimov is the head of the infectious diseases unit at Ashkelon’s Asuta Hospital and serves as the coordinator of the Health Ministry’s epidemics team, the top medical advisory body informing the government’s effort to fight the spread of the coronavirus causing COVID-19.

He spoke as strict rules prohibiting most Israelis from leaving home went into effect Sunday morning.

“If the public obeys the rules,” he said, “then in another week, two, three, we will see a decline in the rate of the spread, and the spread will start to happen within households only. Our plan at the moment is to enable us to take care of people, to prevent mass deaths of people because we can’t care for them.”

But even if the numbers drop off next month, he indicated that rules designed to keep the virus in check would remain in place.

“We have to assume that these restrictions, in some form, will be with us for a long time,” he said, though he indicated that he was not directly involved in the timing of the measures. 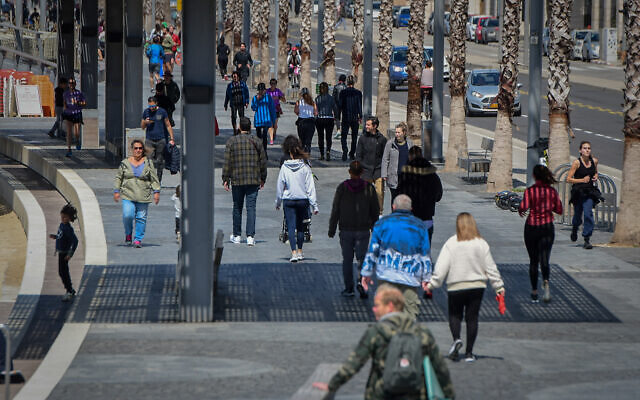 He said he thought the restrictions would be in place at least until the summer.

“We hope the summer [heat] will suppress new infections,” he said, referring to initial findings suggesting that the virus may be sensitive to warmer weather.

The restrictions, which are set to be enforced by police, are meant “to stop and slow the rate of infections. If we take people out of quarantine now and send them to work, we’ll have a tremendous wave of infections we won’t be able to control. So we must maintain this tension between living our lives, the routine of our lives, and preventing mass infection and people dying from serious illness. People will continue to work and to live their lives with some restrictions, in the hope we can suspend more [restrictions] when it gets warmer.” 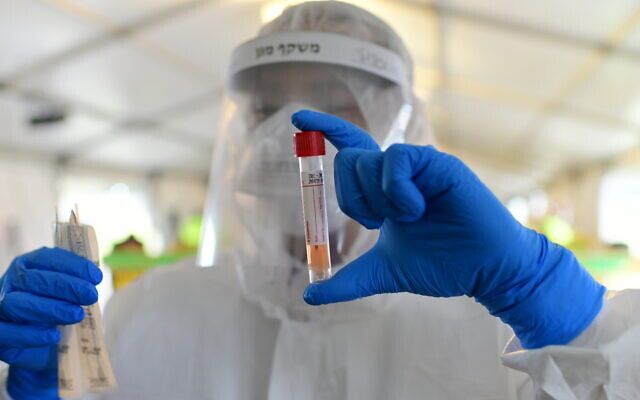 If the disease’s spread isn’t reduced, he warned, “in the end there’s a limited number of beds, of medical staff, of medical equipment. [If the infections graph rises], we will further increase the restrictions.”

Health officials around the world, though, have said they see the crisis continuing past the summer.

On Friday, a top British medical researcher told the BBC the restrictions could be around for “two-plus years.”

Prof. Neil Ferguson heads the Imperial College London research team that produced a paper in January warning the British and US governments that the potential death toll from the virus could be catastrophic if social-distancing measures weren’t taken quickly.

“We’re talking about suppressing transmission at a level whereby, hopefully, only a very small fraction of the country will be infected [at a time],” he told the BBC on Friday of the distancing measures required.

“So eventually, if we continued this for two-plus years, maybe a sufficient fraction of the country at that point might have been infected to give some degree of community protection.” 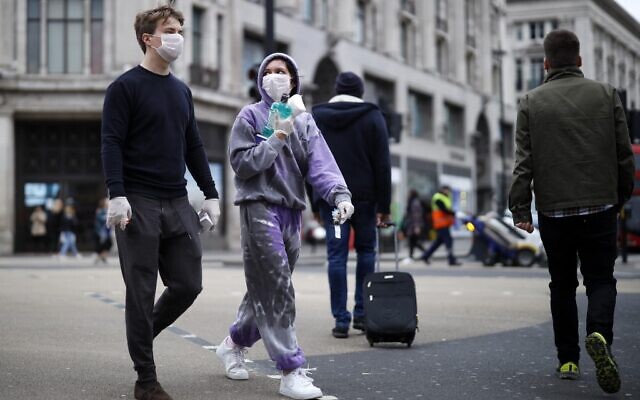 A man and woman wear protective face masks and gloves as they cross Oxford Street in central London on March 17, 2020. (Tolga Akmen / AFP)

Officials worldwide have also warned countries not to pin their hopes on a vaccine. Not all viruses prove susceptible to the immune response engendered by vaccines, and rushing through clinical trials could produce unsafe vaccines.

Most estimates put a vaccine at 18 months away, though some have pinned hopes on retrofitting old drugs to treat the virus sooner.

Israel has put in place a number of emergency regulations aimed at keeping Israelis at home, though they are all temporary. The latest measures, which allow police enforcement and close down almost all non-essential businesses, will expire in a week after going into effect Sunday morning.

According to the new rules Israelis must remain at home, with exceptions made for buying essential food and medical supplies or seeking medical treatment. Other exceptions include attending demonstrations, aiding an elderly or ill person, blood donations, attending court hearings, seeking aid from welfare services, going to the Knesset, and attending religious services, including weddings and funerals (which must have no more than 10 people present) or visiting a ritual bath (mikveh). 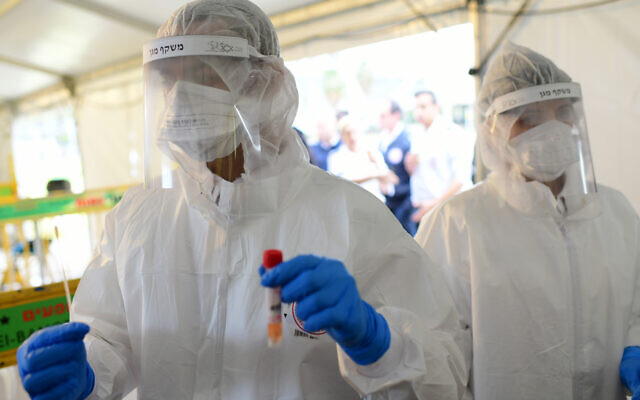 Israelis were permitted to exercise outdoors, with no more than two people together, and to venture out for short walks near their homes. The ban also limited the number of people who could drive in a car to two, unless they were members of the same household (this does not apply to “essential” errands, carpools of essential workers to and from work, and delivery services).

The head of the coronavirus treatment team at the Health Ministry said Sunday that if people abide by the directives and stay home, Israel will start to see the results in approximately 10 days.

“Self-isolation is very helpful and we will see the results in around ten days. Hopefully the self-isolation will flatten the curve significantly,” Dr. Boaz Lev told the Kan public broadcaster, referring to the protocol which tries to prevent a surge in the number of people requiring hospitalization at the same time.

Throughout Saturday the Health Ministry urged the public to stay indoors even if the weather is warm, amid reports that many Israelis had ventured outside, flouting directives. Videos showed police dispersing people in crowded locations such as Yarkon Park and the Tel Aviv promenade.

Health Ministry deputy director-general Itamar Grotto told Channel 12 news Saturday, “People will have to be in lockdown for an extended period of time. It’s not a matter of a day or two. We’re talking about at least two weeks as a first stage, and it could mean several months in the second stage.”

He added that infections throughout the country could yet reach 30-60 percent, “with the vast majority unaware that they are ill.”

As of Sunday morning there were 945 people diagnosed with coronavirus in Israel. The Health Ministry said 20 people were in serious condition, two days after an 88-year-old man became the country’s first fatality in the global pandemic. The ministry also said 24 people were listed in moderate condition and that the rest had mild symptoms.

In his Sunday interview, Brosh-Nissimov defended the current rate of coronavirus testing, which has slowly ramped up but remained at under 3,000 tests a day despite calls by critics for many more.

Israeli health authorities have come under fire for the slow rate of testing and claims of testing being slowed down over Shabbat. The increase in testing is seen as a major factor in the large spike in cases in recent days.

“What’s important is not how many tests are being conducted. There’s no aspiration to test, find and diagnose all the coronavirus carriers in Israel. The Health Ministry is conducting sampling, and there are enough test kits for that,” he said. 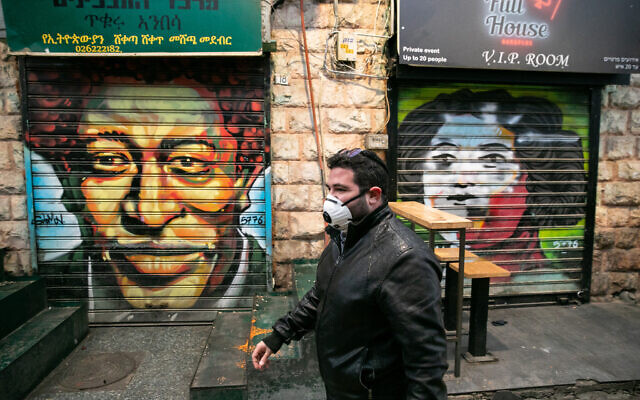 An Israeli man wearing a face mask for fear of the coronavirus walks in the Mahane Yehuda Market Jerusalem on March 20, 2020.(Olivier Fitoussi/Flash90)

“The fantasy that every person who wakes up in the morning with a sore throat will be checked is not practical and not necessary. Those who have it will stay at home [anyway due to existing restrictions] and get better. Those who are seriously ill from it will get care in a hospital. The tests are one helpful tool among many others.”

The Health Ministry says it has boosted testing for the virus from some 500-700 tests a day to around 2,200 per day and officials have said the number of tests would increase to 3,000 per day by Sunday and 5,000 per day by the following week.

The disease generally only shows mild symptoms in the young and healthy, but can cause serious respiratory issues and death in older adults and those with underlying conditions.