At a time he has compelled Ghanaians to pay more taxes to his government, President Akufo-Addo has offered a tax exemption of $23,983,033.43 to a company called Platinum Properties Limited (PPL) to put up a hotel facility in Accra.

PPL is a Special Purpose Vehicle owned and controlled by Inter-Afrique Holding Limited(IAHL) set up to put up the hotel facility called the Pullman Accra Airport City Hotel.

A letter from the President dated November 13, 2019, signed on his behalf by his Executive Secretary, Nana Asante Bediatuo, who is his cousin, to the Ghana Investment Promotion Centre (GIPC) granting the tax exemption reads;

“Reference is made to your correspondence numbered LE09/37P/01 dated 8th November, 2019, seeking approval for Platinum Properties Limited to be granted strategic Investor status to enjoy exemptions from various taxes in relation to the development of the Pullman Accra Hotel and Serviced Apartments Project in Airport City, Accra (the “Project”).

In light of Article 174 (2) of the Constitution, the Minister for Finance is, by a copy of this letter, hereby directed to obtain the requisite approval of Parliament, to give effect to paragraph two (2) above.

The Finance Minister, Ken Ofori-Arthur, who is also a cousin of the President has sent a memorandum to parliament for parliamentary approval to be given for the tax exemption. The memorandum, a copy of which this paper has, also reads

Executive approval was granted to Platinum Properties Limited as a Strategic Investor, pursuant to section 26 (4) of the GIPC Act 2013. (Act 865) on the recommendation of the Board of the Ghana Investment Promotion Centre (GIPC) for tax exemption on the following:

In line with Article 174 (2) of the 1992 Constitution, the waiver for tax exemption is hereby submitted for the consideration and approval of Parliament.”

According to the memorandum, The Pullman Accra Airport City Hotel & Serviced Apartments is a dual-hospitality project, positioned to become Ghana’s largest and most distinguished hotel facility.

The memorandum states that the Project is being promoted by Platinum Properties Limited (“PPL”), a SPV owned and controlled by Inter-Afrique Holdings Limited (“IAH”) and the Ghana Infrastructure Investment Fund (“GIIF”).

Find below the letter from the Presidency 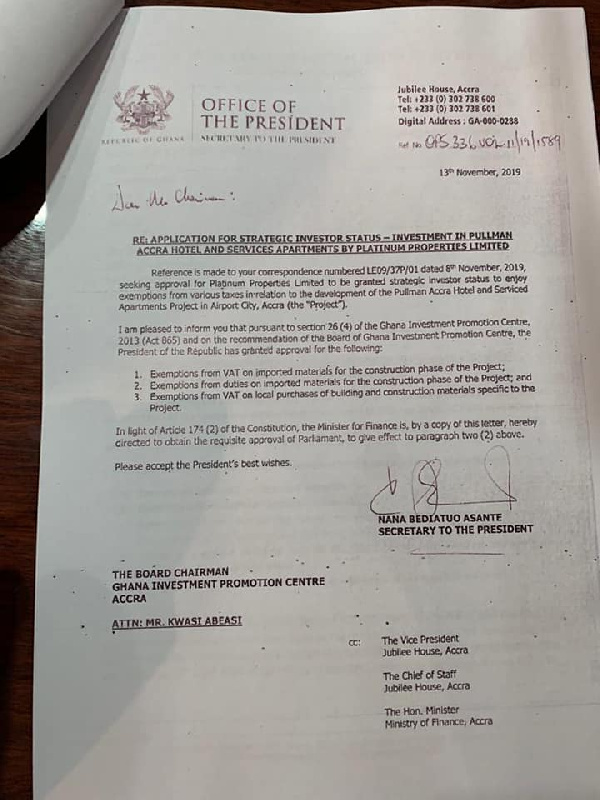 I want to be like Kwame Nkrumah – Sam Jonah

1 Mins read
Business mogul and statesman, Sir Sam E. Jonah, says if he was to get the opportunity to be President of Ghana, he would…
EconomyPolitics
1 Mins read
The Executive Director of Africa Education Watch has indicated that the Government of Ghana since January this year has been feeding the…
Covid-19EnergyPoliticsSustainabilitywater

2 Mins read
information Minister, Kojo Oppong Nkrumah has indicated that Ghanaians will have to pay for the free provision of water and electricity introduced…