Can charcoal make beef better for the environment?

On a hot December day on a cattle farm in Western Australia, the smell of manure is hard to ignore. But not for long – as I watch, a cluster of dung beetles is hard at work and soon the cows’ manure will be buried in the soil. On a warm day it can take less than an hour for the beetles to eradicate a cowpat completely from the paddock’s surface. Other times, when the conditions are cooler and the beetles are less active, it may take up to two weeks. Either way, the insects work fastidiously until the only odour cutting through the dry summer air is the scent of eucalyptus from the giant Karri trees.

The cowpats that these particular beetles are burying are not ordinary cowpats. On this farm near Manjimup in south-west Australia, they are rich in a substance called biochar – essentially charcoal produced through a slow-bake process – that has been added to the cattle’s feed. This black, coal-like substance is leading a quiet revolution in this pocket of rural Australia, in an effort to reduce the cows’ methane emissions and to sink more carbon into the soil.

Biochar is one way farmers are working to reduce the hotly debated environmental impact of cattle. As cows digest their food they release methane, a greenhouse gas more than 25 times more potent than carbon dioxide. The methane leaves their digestive tract at both ends – through “eructation”, better known as burping, and a small amount through flatulence. Once out of their system, their dung continues to release small quantities of methane.

There are more than 1.4 billion cattle in the world today, and together they release 65% of all greenhouse gases from livestock. Efforts to reduce the methane emissions from cows have ranged from vaccines to feeding them seaweed. There is now growing interest in whether by adding another substance to a cow’s diet methane emissions could be reduced: biochar.

This crumbly black substance is often made as a by-product of forestry and other industries. It is created when biomass is left in high-temperature, low-oxygen conditions, where it undergoes a process called pyrolysis. Long before its recent uptake in modern farming, biochar was created and added to soil by indigenous farmers in Amazonia from around the 5th Century BC, to form the rich black earth of the Amazon Basin known as “terra preta”. 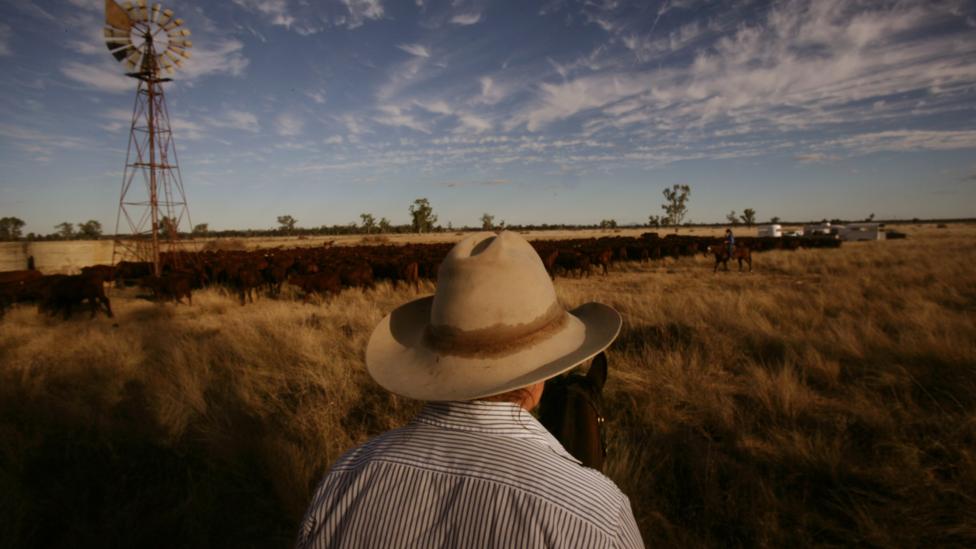 Cattle produce most of their methane through eructation – or burping – but this can be reduced by altering their diet (Credit: Getty Images)

Feeding biochar to cows also has a long and illustrious history. In the 3rd Century BC, Cato the Elder wrote that sick cattle should be given “three pieces of live coal”, or charcoal. However, he also recommended giving the sick cows three pints of wine, and a series of other questionable substances.

More recent studies have found that there may be some wisdom in the former of Cato the Elder’s musings. In 2012, a research group in Vietnam found that adding 0.5-1% biochar to cattle’s feed could reduce methane emissions by more than 10%, while other studies have found reductions of up to 17%. Studies on beef cows in the Great Plains of the US found that adding biochar to feed reduces cows’ methane emissions by between 9.5% and 18.4%. Given that methane makes up 90% of greenhouse gas emissions from cattle farming, this could considerably cut cattle’s environmental footprint.

The mechanism by which biochar is thought to lead to these reductions, however, is not well understood. One way it is thought to work is by “adsorbing” methane molecules, or holding them on its surface. Another theory is that it biochar favours the growth of certain microbial communities in the cow’s microbiome, resulting in more efficient digestion. To get to the bottom of how biochar reduces cow methane emissions, and by how much, more research is needed, writes Claudia Kammann of Hochschule Geisenheim University.

Given that methane makes up 90% of greenhouse gas emissions from cattle farming, this could considerably cut cattle’s environmental footprint

On this farm near Manjimup, cattle farmer Doug Pow has been taking part in studies on biochar for several years. He gets his biochar as a by-product from a local silicon producer. He was originally drawn to it not for its potential to reduce his herd’s methane emissions, but as a way to sequester more carbon into the soil. This had the dual prospect of sinking carbon and improving soil health.

“Due to the highly porous nature and high surface area of biochar, it improves soil’s ability to hold more water,” says Bhawana Bhatta, a soil science lecturer of the University of Melbourne. “The fine network of pores within biochar gives room for soil microorganisms to live. This increases the microbial diversity in the soil.”

But at first Pow had puzzled over how he would be able to get the biochar into his pastures. Usually it required large and expensive specialist machinery. “I thought, we haven’t got big-time farming equipment, and my gates aren’t wide enough,” he says.

Pow wondered, would it be possible to get the biochar in the ground with little to no cost by using his herd of cows to distribute it? After all, they wandered his pastures all day long and their dung was sprinkled liberally across it. They seemed like a ready-made delivery system. 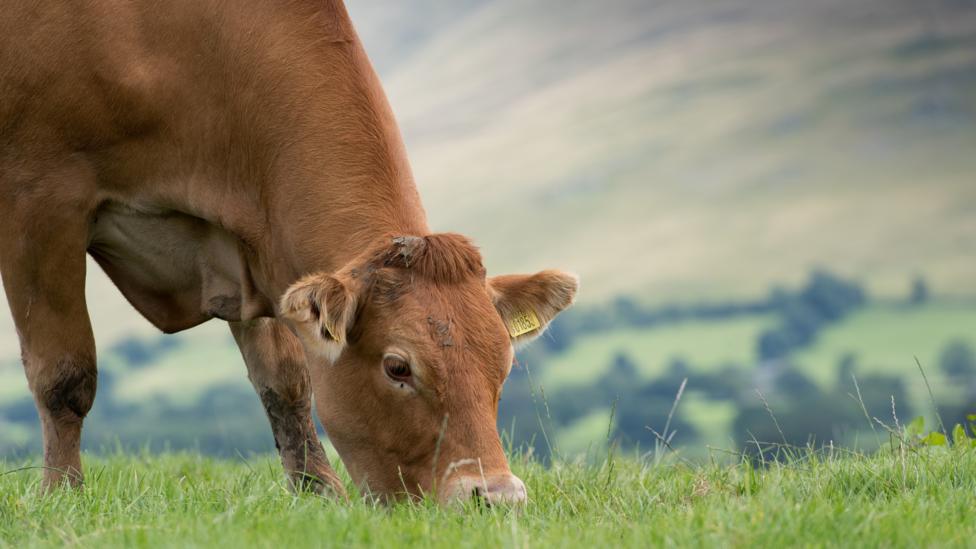 Cattle farming is a source of income for an estimated 1.3 billion people worldwide (Credit: Getty Images)

But once the biochar-enriched cowpats were distributed across his land, there was a further challenge. How would this dung get into the ground?

Cowpat is incongruous in the harsh Australian landscape. It was the early European settlers who introduced cows, sheep and other ruminants. Kangaroos and other native species produce waste in small, fibrous pellets that the dung beetles native to Australia have co-evolved to work with. But these beetles ignore the soft, wet pats produced by cows.

Kangaroos and other native species produce waste in small, fibrous pellets that the dung beetles native to Australia have co-evolved to work with. But these beetles ignore the soft, wet pats produced by cows

Pow had to seek out bovine dung beetles, which were first introduced to Australia in the 1960s but remain relatively rare. After seeking assurance from an entomologist to discern if feeding biochar to his cattle would harm the dung beetle larvae that lived in the cowpat, Pow went ahead and started a trial, banding together with biochar researchers such as Stephen Joseph of the University of New South Wales to document the progress.

Enticed by the addition of molasses along with the biochar, Pow’s cattle dutifully chowed down their enriched feed, produced their cowpats, and then the beetles got to work. The bovine beetles then got started on the cows’ dung, working in pairs. The male brings the dung to the female beetles who dig a tunnel into the soil. Every time a beetle burrows into the soil, it also brings to the surface new soil with high levels of phosphorus, which acts as a natural fertiliser.

Studies over a three-year period on Doug’s farm showed an increase in total organic carbon, and enhancing soil fertility from when he first started. The research showed that he was also improving soil water retention and increasing the amount of carbon that was being retained in the soil. Overall, Pow saw a “quantum leap” in the quality of his farmland, as it became more economically viable and productive. “We are doing our bit to re-engineer the soil in a positive way, for the long-term benefits of our world,” Pow says.

“It was a very ingenious way of getting biochar into the soil without capital expenditure,” says Kathy Dawson, an executive officer at Warren Catchment Council, a not-for-profit organisation that assists with natural resource management in the south-west region of Western Australia.

Biochar is typically a very stable form of carbon, unlike biomass that is left to rot at the surface, releasing carbon dioxide in the process. Once biochar is buried in the ground, it can stay put for several hundred years. The presence of biochar is also thought to stabilise organic carbon in the soil, says Bhatta, resulting in higher carbon sequestration. The idea of burying this coal-like substance in the ground has been proposed as a promising carbon sink to address climate change, but the quantities required to see a significant effect would have to be vast.

But, given the interest in the substance’s other environmental benefits, will other farmers take up the biochar and dung beetle system? There has been hesitancy because of questions of how cost-effective it is for farmers. The benefits to soil health, too, depend on the type of biochar used. Pow believes that legislation and added incentives such as financial credits would be needed to encourage broader uptake of this type of carbon farming. He remains hopeful that the system he has developed will encourage more farmers to take it up in time.

While cattle farming has a vast environmental impact, it is also a livelihood for an estimated 1.3 billion people worldwide. The unlikely combination of biochar and dung beetles could be one way that farmers can reduce their contribution to the climate crisis, while reaping the benefits of healthier soil.

AfDB calls for strong investment in the youth at the 2022 Commonwealth Business Forum.

3 Mins read
The 2022 Commonwealth Business Forum opened in Kigali, Rwanda, on Tuesday with a resounding call for action to do more to spur…
AfricaAgribusinessagriculture

1 Mins read
The Ghana Buffer Stock Company is blaming rising prices of foodstuffs on the activities of middlemen in the sector. According to the…
Agribusinessagriculture