Facebook beat on top and bottom lines, but the stock fell more than 7% on Wednesday after the company reported rising costs and expenses and a narrowing operating margin.

Here are the key numbers:

Facebook reported revenue growth of nearly 24.7% compared to a year prior, making it the fourth straight quarter that the company delivered sub-30% growth. Facebook COO Sheryl Sandberg announced that the company now has more than 8 million advertisers, up from 7 million in October 2019. 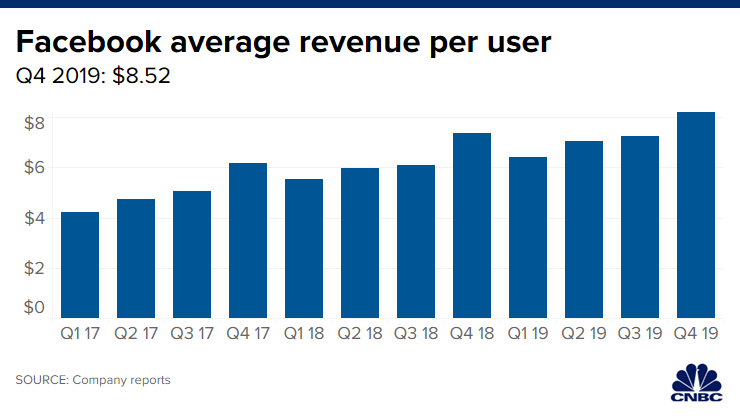 “We had a good quarter and a strong end to the year as our community and business continue to grow,” Facebook CEO Mark Zuckerberg said in a statement. “We remain focused on building services that help people stay connected to those they care about.”

Facebook said it counts more than 2.89 billion monthly users across its family of apps, compared to 2.8 billion in the previous quarter. This metric is used to measure Facebook’s total user base across its main app, Instagram, Messenger and WhatsApp.

In the U.S. and Canada, Facebook’s user base rose to 190 million from 189 million a quarter earlier. Its user base in Europe increased to 294 million from 288 million daily active users in the prior quarter. 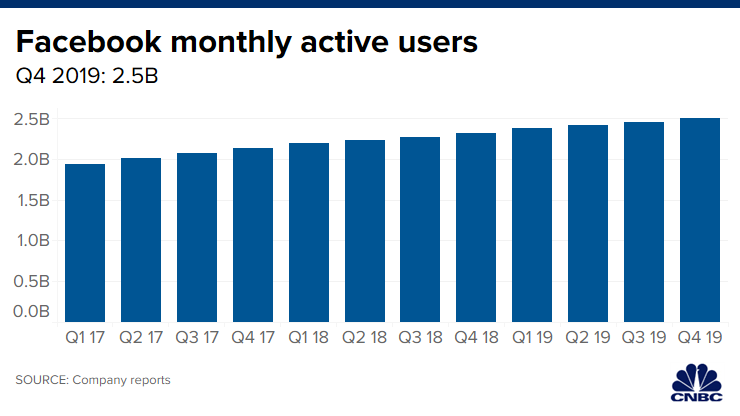 During a call with analysts, Zuckerberg said Facebook is preparing for an “intense year” that will include the 2020 U.S. election. Zuckerberg said it is his goal to better communicate the company’s policies on numerous issues.

“My goal for this next decade isn’t to be liked, but to be understood,” he said. “Because in order to be trusted, people need to know what you stand for.”

Facebook will make privacy a key focus of 2020 as a result of the company’s July 2019 $5 billion settlement agreement with the Federal Trade Commission, Zuckerberg said. The company, however, has yet to pay the penalty as the agreement is still pending court approval, Facebook Chief Financial Officer David Wehner said.

“It’s going to take time but over the next decade I want us to build a reputation on privacy that’s as strong as our reputation already building good, stable services,” Zuckerberg said.

Over the past year, Facebook has struggled with numerous regulatory challenges.

The company announced the libra digital currency in June, which has since struggled with pushback from lawmakers and regulators around the globe, losing key partners in the process.

In July, the company agreed to the $5 billion FTC fine as a result of the agency’s probe following the Cambridge Analytica scandal. The company is also facing four separate antitrust-focused investigations that were launched over the past year.