How Effective And Reliable Are Ghana’s Emergency Services Call Centers

Government has streamlined the country’s emergency response numbers into a single hotline, 112 for all emergencies in the country.

The new number will now handle cases that require the services of Ghana Police Service, Ghana National Fire Service and the National Ambulance Service across all mobile networks.

This means the 191, 192 and 193 which hitherto were dedicated to the Police, Fire and Ambulance services are no longer effective.

Making the announcement at the Black Stars Square, President Akufo-Addo indicated that the new move is to provide more safety and assist state agencies to deliver on their mandate in a more improved manner.

“Government has succeeded in getting a unique emergency number for all providers of emergency service in the country. In the past – the Police Service, the Fire Service and the National Ambulance Service all had emergency response numbers. I am happy to announce that thankfully, we have merged all emergency numbers to one number which is 112. For any form of emergency -either police service, fire service and ambulance service the number to dial on all mobile networks is 112,” Nana Addo cautioned against prank calls.

The first emergency call was to the National Ambulance Service centre.

The second call was made to the Electricity Company of Ghana.

The third call was to the Ghana Police Service.

The fourth and last call to the National Fire Service and Ghana Water Company Limited respectively were all not answered to.

However, only the ECG called back to find out whether the complaint made to them have been rectified.

We Get 200 Prank Calls Every Hour – Ambulance Service

The emergency Technicians at the National Ambulance Service Dispatch Centre have bemoaned the rate at which some individuals deliberately interrupt with prank calls.

Matilda Nartey, Head of Dispatch at the centre, in an interview has revealed that her outfit records as high as over 200 prank calls in an hour, a situation she described as worrying.

She, however, disclosed that measures are being put in place, in collaboration with the Police so that they could name and shame those who engage in such acts as well as prosecuting them.

Late last month, President Nana Akufo-Addo inaugurated the 307 ambulances procured by the government for distribution to all constituencies in the country.

The inauguration took place at the forecourt of the Black Star Square in Accra.

The ambulances are fitted with advanced life support equipment and tracking devices.

In his address, President Akufo-Addo announced that 112 would now be the new number for all emergency services.

The National Ambulance Service (NAS) has received financial clearance from the Ministry of Finance to recruit 900 additional staff in 2020.

The recruitment will help augment the staff strength of the service and facilitate the operationalization of the ‘One-constituency, One-ambulance’ policy of the government.The recruits will be made up of different professionals, such as drivers and paramedics, categorized under basic and advanced service providers.

The Ghana National Fire Service (GNFS) after Peace FM’s broadcast responded that, their system of receiving emergency call is such that, only one person can be attended to when on the emergency line.

Speaking to Salaamat Kuukua Paintsil, Mr. Ellis Oko Robinson, the Public Relations Officer for the Fire Service explained that, when a call is made on their emergency call line, the system is such that, till the person is attended to the next person calling will have to hold on till the Service is done with him or her before the next call is put through for them to attend to.

Mr Ellis Robinson explained that it is one of a major challenges the National Fire Service is facing and pleaded with Ghanaians to bear with them as gradually it will change for the better. 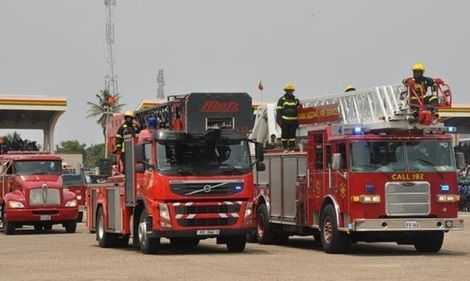 2 Mins read
British Airways unveils Ozwald Boateng-designed uniforms British Airways has unveiled the new uniforms which will be worn by over 30,000 employees, more than…
FashionLifestyle

Tom Ford’s $2.8 Billion Deal To Sell His Fashion Brand To Estée Lauder Makes Him A Billionaire