Is China Going To Have the Decency to Apologize?

On the evening of Sunday 26th April, a silent procession took place at Black Star Square in Ghana as a sign of solidarity with the Africans who have been marginalized and abused in China during the Covid-19 pandemic.

The action was initiated by the Freedom Movement, as a peaceful demonstration to raise awareness for the mis-treatment of black people in China and urge for a public apology to all Africans and Black people worldwide.

“As a concerned global citizen, I was deeply disturbed by the treatment I saw of black people in China being evicted from their homes, forced into quarantine and even being denied admittance to restaurants, hotels and other businesses. I was also surprised that even despite the close relationship between China and most African countries, there hasn’t been any public denouncement or apology from the authorities. I felt the need to use my voice to let the world know that Covid-19 simply cannot be used as an excuse to dehumanize or deny the civil rights of black people in China or any other nation,” says Freedom Jacob Caesar, an industrialist, developer and a nation-builder.

During the procession, signs reading captions such as “Africa is a Beacon of Hope” and “Africa is separated by culture but united by colours” were held up by participants who maintained social distancing measures and wore face masks inscribed with the words ‘Freedom of Speech”.

Police and other security personnel were also on hand to ensure that the demonstration remained peaceful.

“Although, African diplomats in China have expressed concerns to officials there, this mal-treatment is an issue for every black person in the world. Any one of us from the continent or the diaspora whether it be Jamaica, America, France, or Nigeria living in or travelling to China might suffer these same abuses. If we simply remain silent, this treatment and disrespect will continue and even become more widespread in China and other countries.

Black people are not animals as we have been depicted in museums and galleries in China and these actions are unacceptable considering the eminent value that Africa and our resources play in global economies and supply chains,” adds Freedom who recently distributed food and other supplies to vulnerable communities and the less privileged in Accra amidst the lockdown that was issued as an effort to contain the spread of the Corona Virus.

“Ghana has gained a reputation as a model of democracy in Africa and Freedom of Speech is a fundamental principle that is supported in our democracy. It is important for young Africans and young black people globally to understand the power of our collective voices to effect peaceful change. 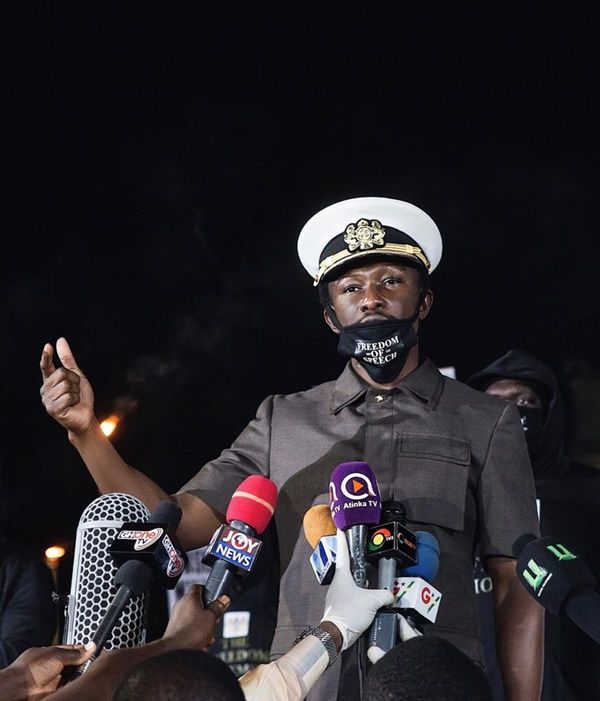 I will continue to use my voice and platform to change perceptions of Africa, build unity and forge deeper connections between Africa, the West and the East,” said Freedom who operates an international real estate development company in Ghana and other countries and has hosted personalities at his hospitality ventures including Naomi Campbell, Idris Elba, Conan O’Brien, and Chinese billionaire entrepreneur Jack Ma.

“I believe that this virus does not know gender, race, religion, age, or colour and this could be a sign telling the world that we are all equal and need to come together as One World and One Universal people to overcome the crisis and restore humanity together.”

The Freedom Movement’s procession is one of the first public demonstrations on the continent that has been held to bring awareness to the issue of the treatment of blacks in China and urge for a public apology from the country’s authorities on behalf of African and Black people worldwide.

3 Mins read
Dr. Lauren A. Johnston is a research associate, China Institute, SOAS, University of London. She is founder and managing director of New…
Covid-19EconomyHeadlineLeadershipOpinion

Managing Ghana’s Economy in the time of COVID-19

1 Mins read
Thank you to the state, armed forces, family and people of Ghana for arranging for Jerry the departure he deserved. He was…