The Minority in Parliament is demanding an investigation into what they describe as partisan distribution of food relief to poor and vulnerable households amid the coronavirus pandemic.

The caucus has added its voice to calls by the Klottey Korle MP Dr. Zenator Agyemang-Rawlings over the matter.

Speaking at a press briefing in Parliament, the opposition MPs described the trend as appalling and disappointing.

MP for Ashiaman Ernest Norgbey said: “the NPP women organiser is the one cooking the food. The pictures and everything I have is here. The Veronica Bucket that was brought to the community that should be distributed to everybody, pictures of the NPP candidate was fixed on it and distributed including the local government sticker also on it.

“It is a known fact that in Ashiaman and its environs that food is being distributed on party line and in some cases they have to request for party ID cards before you will be served the food.”

MP for Odododiodio Nii Lante Vanderpuije said “I stand here and I say it as it is. What is happening is appalling, it’s disappointing and very sad. Just like my sister said that in the period of pandemic our nationalistic sense should tell us that we must be very humanitarian. We must approach whatever we are doing with a sense of responsibility.

“But what is happening in Odododiodio just as she said in all other places is NPP mechanism being used to distribute food to the community.”

Describing the situation in his area he noted “sometimes when the NPP vehicles come to park, I’ve seen it myself, they call NPP boys in the area who are organisers and hand over the food to them and tell them who and who to go and give to in the households. If you are standing by the vehicle and you are a known NDC person in the area you will never be given.

“I feel sad that I sat in this house and contributed to the debate to give money to government to do such a thing and then I sit down and I look at my people being discriminated upon, it’s sad.”

The Klottey Korle MP has called on President Akufo-Addo to institute a probe into reports of politicisation of food aid to the vulnerable in the lockdown areas.

This was after Gender minister Cynthia Morrison denied her claims that NADMO officials were demanding party identification before dishing out food to some people in her constituency. 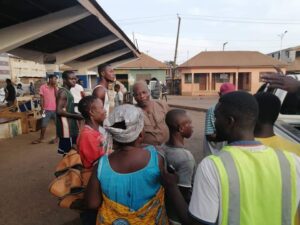 They described his conduct as unprofessional and unethical.

2 Mins read
information Minister, Kojo Oppong Nkrumah has indicated that Ghanaians will have to pay for the free provision of water and electricity introduced…
Covid-19HeadlinePolitics