Rice farmers in the five regions of the North have made a passionate appeal to government to put in place mechanisms to ensure that local farmers partake in decisions to resolve issues in local rice production.

According to the farmers, although government acted swiftly to respond to the concerns raised by the farmers about their inability to get ready market for the hundreds of tonnes of local rice produced in the Fumbisi, Yagaba, Tono, Vea, Nasia and Nalerigu valleys, the problem persists.

At a Meeting at Navrongo in the Upper East Region organized by the Peasant Farmers Association of Ghana (PFAG) to among other things discuss strategies to boost rice production and marketing in the coming years, the farmers pointed out that making Ghana self-sustainable in rice production will not succeed without the involvement of rice farmers themselves in decision making to improve the sector.

They further expressed regret that although arrangements were made for the National Food Buffer Stuck Company (NAFCO) and a private company, Avnash Industry Ghana, to purchase local rice from the farmers, the challenges of getting ready market for the produce has not been resolved as some of the farmers have incurred losses either through bush fires, or middlemen and market women taking advantage of the situation to offer them ridiculously low prices as well as purchasing the rice on credit without payment.

They further explained that farmers in the rice valleys in the Upper East Region currently do not have the needed resources to transport their rice produce from their respective farms to Tamale for Avnash company to purchase. 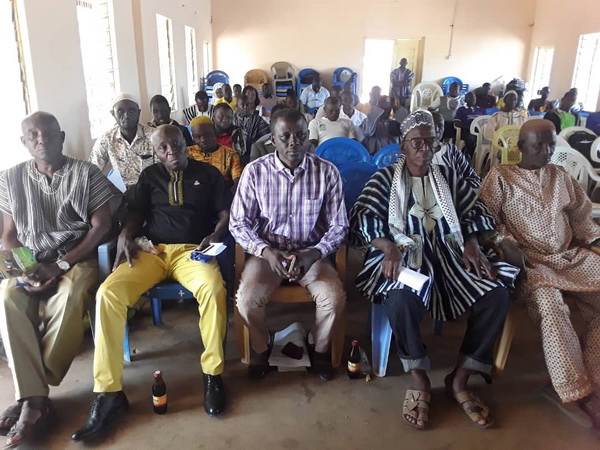 EXECUTIVES
The National President of PFAG, Mr Abdul Rahman Mohammed observed that “as we speak, I have lost 50 acres of my rice farm due to bush fire and most of you equally have such bad experiences”.

He cited other challenges as low and unreliable rainfall in recent times, bad feeder roads, difficulty in accessing credit for farming activities and limited access to extension services.

Mr Mohammed noted that most of the challenges being faced by the farmers are “historical and several efforts in the past and present were implemented to address them but unfortunately they are far from over.”

The Head of Programmes and Advocacy of the PFAG, Mr Charles Nyaaba observed that in 2018, the Avnash Company in Tamale guaranteed ready market for rice farmers in Northern Ghana.

“Nevertheless, their failure to buy rice in 2019 led to a glut in the months of November and December which triggered the rice campaign initiated by the PFAG”, Mr Nyaaba further noted.

According to him, the PFAG has observed that after the campaign, many private individuals and organizations who have no hint of the difficulty “we the farmers went through but are fortunate to have access to government institutions due to their proximity to the seat of government, have started lobbying for support for rice sector development without consulting any of the farmers in the valleys who are facing the problems.”