“The technology we use today in epidemic control was hard to imagine in the past,” said Yang Fei, vice chief in Fuhe town, Suizhou city of Central China’s Hubei Province.

The city is implementing virus prevention through digital means. “The calculation work used to take a week to complete, but now it can be done within two days,” Yang said.

Suizhou is 170 kilometers from Wuhan, the epicenter of the novel coronavirus. More than 1,200 people have been confirmed with COVID-19 in Suizhou as of press time.

In just two days, 2.2 million citizens in Suizhou have registered their health condition. All they need to do is click on their phones and upload their information.

Suizhou and Alibaba have been working together to develop a “digital prevention system,” which is realized through apps such as DingTalk or Alipay. People can sign up with their health conditions, report about possible infections, submit online inquiries and follow epidemic news.

The new registration method not only shortened the process, but reduced the possibility of government employees getting infected. 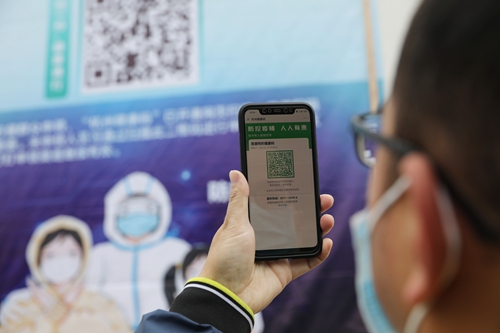 The digital prevention system is provided to local governments and communities for free, according to a statement Alibaba sent to the Global Times. At least 29 provincial regions have adopted the system, according to Alibaba on Sunday.

As early as in 2015, Suizhou integrated smart city building into its key projects, according to a local news website. The smart city is based on aspects such as cloud computing, the internet of things, mobile internet and big data, covering livelihood, environment, public security, urban service and business.

According to a Deloitte report on global smart cities, the smart city market has kept growing at a 30 percent increase annually and 48 percent of the worlds of smart city pilots are in China, china.com reported in December 2019.

COVID-19 has killed more than 1,500 people in China. In the wake of this epidemic, digital tools involving big data and AI are employed to help disease prevention and control.

Since the outbreak, passengers have to fill out personal information including their name, ID number, and address for tracing and protecting people who have had contact with those infected. The policy triggers public concern toward data security.

He Lingnan, deputy chief of the big data and communications lab at Sun Yat-sen University in South China’s Guangdong Province, told the Global Times the full cooperation of various government departments has broken down the data barrier to a great extent, making big data play a good role in the fight against the epidemic. But privacy concerns remain.

“The biggest difficulty of big data has always been the problem of data collection,” He noted. There is a lot of data, but it is in the hands of different departments or companies. Because of information security and other reasons, data cannot be maximally shared, which limits the application of big data, He said.

According to China’s cybersecurity law and law on the prevention and treatment of infectious diseases, it is illegal to collect, use and spread personal information without an individual’s permission.

It is illegal for organizations and institutions without clear legal mandates and persons not involved in the prevention and control of the epidemic organized by the government to use the data.

There should be more specific laws to protect the privacy of personal information in response to the outbreak, said He.

“It is good to see scholars from different disciplines have a strong desire to contribute to the epidemic, which is also necessary for big data analysis. Modeling an epidemic requires collaboration across disciplines, not just computer science but also epidemiology,” He noted.

He’s lab has been working on dispelling rumors based on big data and published articles on the WeChat public account since 2016.

The lab, working with China internet giant Tencent, judge whether to refute the rumor based on the propagation of the rumor and the degree of malevolent influence it has among the public. There is a large database of rumors in the lab, and new rumors will be put into the database for comparison. There is no need to refute similar and frequent rumors, which have constantly been refuted by the media, He said.

Rumors concerning the outbreak are characterized by fast propagation and a multitude of sources. Luckily, the information to refute rumors is as easy to spread, according to He.