The Raging Bull marque has been coming out swinging in a year that’s seen many automakers just trying to stay in the ring. This morning, on the heels of announcing Stephan Winkelmann’s return as CEO, Automobili Lamborghini also revealed the latest (and rumored to be last) variant in its highly successful Huracán model line: the new Lamborghini Huracán STO.

The “STO” in the moniker stands for “Super Trofeo Omolagata” and references Lamborghini’s Super Trofeo race series that balances the playing field with one model of car, the Huracán Super Trofeo Evo—the template for this latest release. A homologated, or street-legal version of its motorsport sibling, the STO features design and performance characteristics that have also been influenced by the Huracán GT3 Evo, a racer that’s earned the checkered flag a combined five times at the 24 Hours of Daytona and 12 Hours of Sebring. 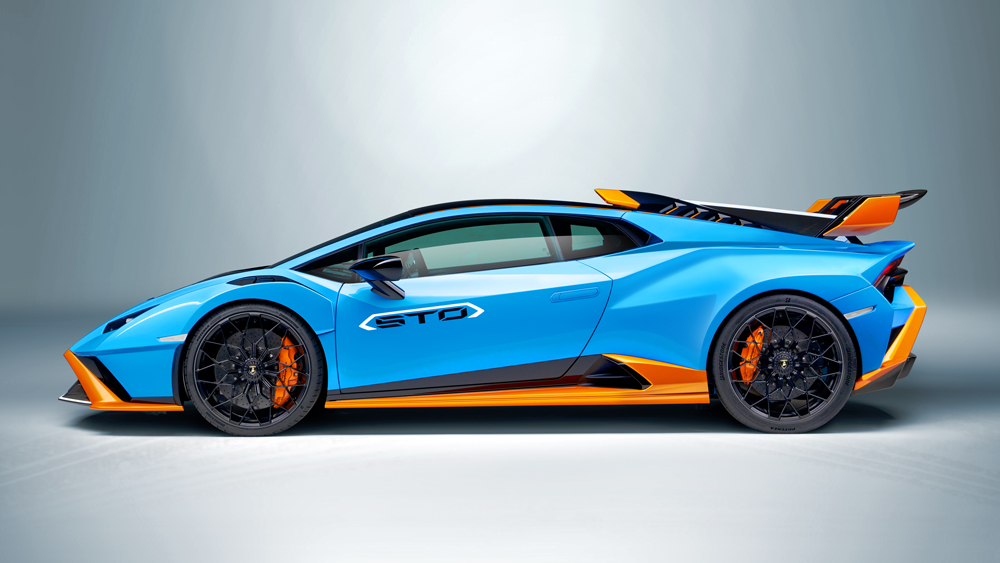 The rear-wheel-drive STO shares the same naturally-aspirated V-10 as Lamborghini’s competition cars; in this case, the engine has been boosted to produce 640 hp, which is about 9 horses more than the track-inspired Huracán Performante. Maximum torque of 417 ft-lbs is delivered at 6,500 rpm. With a seven-speed dual-clutch transmission in the mix, the STO can hit a top speed of 192 mph, and sprint from zero to 62 mph in three seconds flat.

Although the latter performance specs are a touch below that of the Performante’s figures, the STO can come to a full stop from 62 mph in 98.4 feet—a distance that’s 3.3 feet shorter than what’s possible in the Performante. This is due in part to Brembo carbon-ceramic brakes, developed for both racing and road use, which improve overall braking efficiency and offer 60 percent greater stress resistance to those on Huracán predecessors. Additionally, new cooling ducts for the brake calipers mitigate overheating. 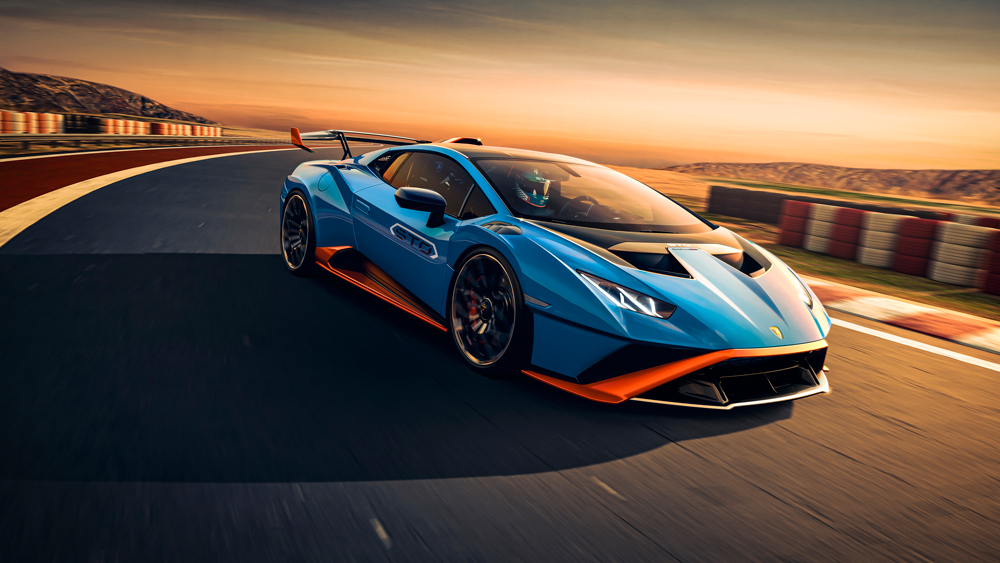 The power train makes possible a top speed of 192 mph and the ability to accelerate from zero to 62 mph in 3.0 seconds.  Photo: Courtesy of Automobili Lamborghini S.p.A.

The STO’s dry weight of only 2,952 pounds—94 pounds lighter than the Performante—is made possible by the chassis and body both being constructed from aluminum and carbon fiber, with the latter comprising the hood and 75 percent of the outer panels. To complement the light-weighting, a host of aerodynamic enhancements include having the hood, front bumper and fenders united in one overarching piece. This element is benefitted by new engine-cooling air ducts on top which increase downforce, as well as a redesigned front splitter and underbody. In addition, the back fender incorporates a NACA air intake to further assist engine performance.

Most noticeable visually, however, are the STO’s shark-like fin along the back hood and the manually adjustable rear wing. The fin serves adds stability in the turns, where it also works to more effectively channel air to the wing, which can be set in three positions for varying levels of influence. The sum of the aerodynamic parts translates to a 53 percent increase in downforce and a 37 percent improvement in air management compared to the Performante. 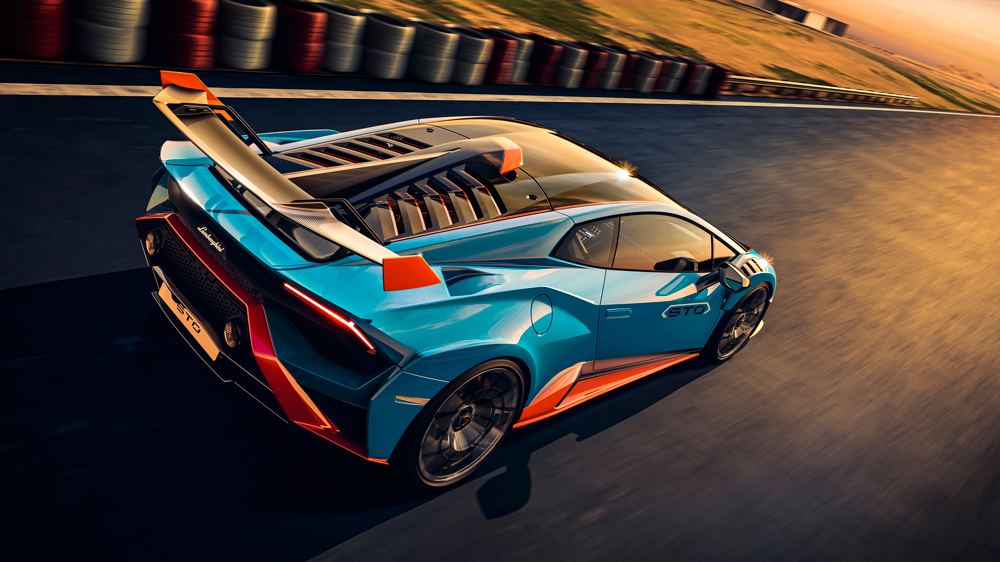 The fin along the back hood aids in stability and more effectively channels air to the wing.  Photo: Courtesy of Automobili Lamborghini S.p.A.

The STO, with rear-wheel steering, has the Evo’s same onboard super-computer-based LDVI system that predicts driver actions based on a variety of inputs and telemetry readings, readjusting every 20 milliseconds. This now comes with three new drive modes: STO, for spirited driving under normal conditions; Trofeo, ideal for the track; and Pioggia, which translates to “rain” and is intended for low-friction conditions. 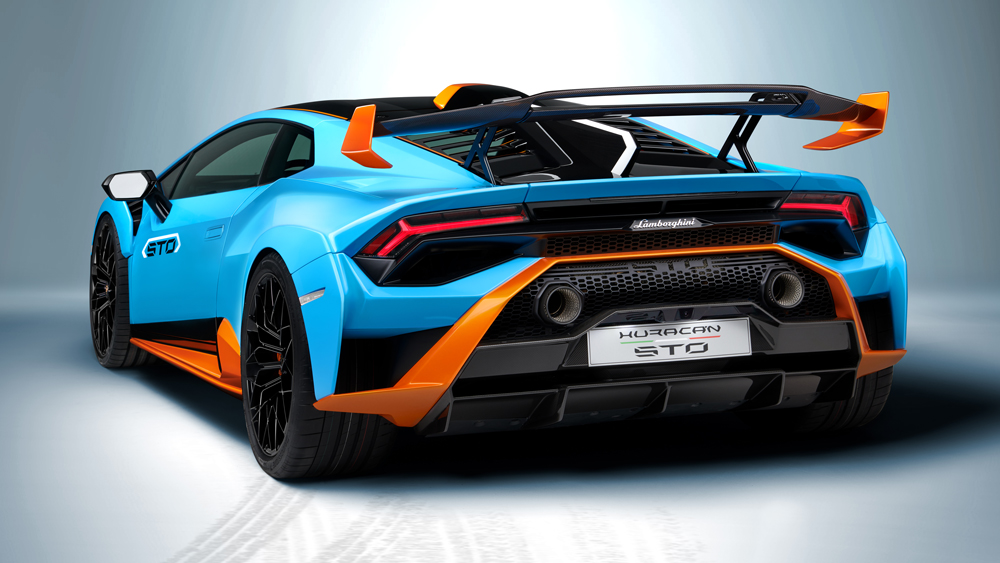 The sum of the aerodynamic parts translates to a 53 percent increase in downforce compared to the Huracán Performante.  Photo by Diego Vigarani, courtesy of Automobili Lamborghini S.p.A.

The cockpit of the car reflects the STO’s racing pedigree with heaps of carbon fiber, including on the sport seats, door panels and even the floor mats. There’s also a comprehensive telemetry display that presents and records all pertinent track data, which can be accessed later via a dedicated app. 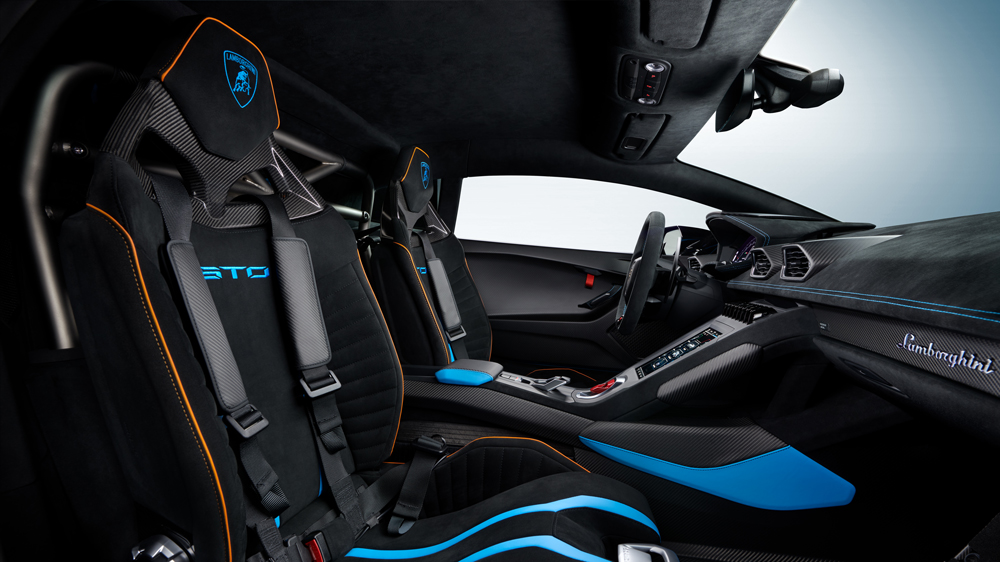 Carbon fiber is used throughout the cockpit, including on the sport seats, door panels and floor mats.  Photo by Diego Vigarani, courtesy of Automobili Lamborghini S.p.A.

Pricing for the Lamborghini Huracán STO  starts at $327,838, with first deliveries scheduled for spring. Whether this is indeed the swan song for the Huracán, a model that has garnered multiple Robb Report Car of the Year titles, is yet to be seen—but there’s no reason to believe that the development of new breeds from Sant’Agata Bolognese will slow anytime soon.

From a Supersonic Jet to a Tourist Spaceship: How Virgin Galactic Could Change Travel as We Know It

2 Mins read
Aerion and Boom, the two front-runners in the revived supersonic-aviation race, could have some serious competition if the speed of Virgin Galactic’s…
Motor / Cars / Marine

Boat of the Week: This 160-Foot All-Carbon Superyacht Is Like a Bond Villain Lair That Floats

3 Mins read
If Bond villain Francisco Scaramanga could buy any yacht, the man with the golden gun would choose 160-foot Khalilah. Bow to stern…