You probably think 2020 has turned out to be a pretty lousy year, what with the coronavirus pandemic, a global recession and unceasing partisan warfare in Washington.

Then again, you’re not Jeff Bezos or Elon Musk.

Thanks to soaring stock prices at Tesla, the company Musk founded, the quirky South African-born entrepreneur has seen his personal wealth soar to unimaginable heights of $147 billion.

In fact, Musk is one of only five centibillionaires in the world, or someone with a personal fortune exceeding $100 billion, according to the Bloomberg Billionaires Index as of Dec. 9.

But even Musk is not quite as rich as Bezos. With a net worth of $182 billion, the Amazon founder is by far the wealthiest person on the planet. He’s so rich that, like Musk, Bezos has his own rocket company.

In fact, Forbes magazine once called Bezos the richest human being who has ever lived. His wealth is simply staggering, says Bloomberg wealth reporter Devon Pendleton, who helps compile the billionaire index.

“It is bigger than the GDP of most countries in the world. I mean, it is larger than the market cap of many companies that are on the S&P 500,” she says.

To put it further into perspective, Bezos’ net worth is bigger than the gross domestic product of Hungary or Ukraine, according to data from the International Monetary Fund.

Rounding out the group of five centibillionaires are Musk, Bill Gates of Microsoft with a net worth of $129 billion, French luxury goods tycoon Bernard Arnault with $110 billion and Facebook CEO Mark Zuckerberg, the poorest of the five, with $105 billion. 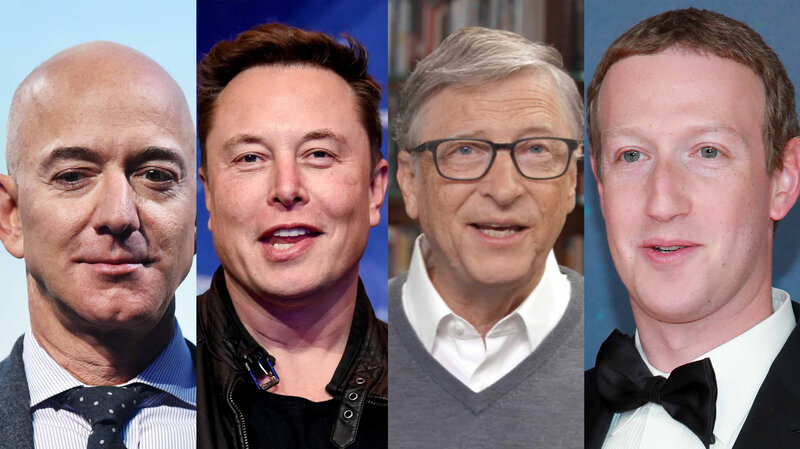 The rising fortunes of the billionaires come in the midst of a pandemic that has thrown millions out of work, with many families still struggling to make ends meet.

But sectors such as technology have benefited as those who are better off have streamed more videos and shopped more online while stuck at home.

Surging technology shares have, in turn, helped prop up a stock market that came roaring back from the lows of March to touch record highs.

And the surging shares have helped a number of executives: Seven of the 10 wealthiest people in the Bloomberg Billionaires Index are American technology tycoons.

In fact, Musk and Zuckerberg each ascended to the $100 billion club this year after shares of Tesla and Facebook rose 677% and 39%, respectively.

To Chuck Collins, director of the Program on Inequality and the Common Good at the Institute for Policy Studies, the rise of the centibillionaires is another sign of the almost unprecedented disparities of wealth in the United States today.

“It’s not anything to celebrate. It’s kind of a disturbing milestone,” he says. “But I think it’s a predictable outcome of four decades of flat wages and steadily concentrating wealth and power.”

It’s not just the centibillionaires who are doing better. A report from the Institute for Policy Studies showed that the collective wealth of the country’s 651 billionaires has jumped by more than $1 trillion to $4 trillion since roughly the start of the pandemic.

But few of these wealthy Americans approach the fortunes of the centibillionaires, even as many of the ultra-rich have also given away billions of dollars, including Gates through the Bill & Melinda Gates Foundation.

Bezos, for example, has such a staggering fortune that despite going through a messy divorce and giving up one quarter of his Amazon shares to his ex-wife, MacKenzie Scott, he still remains the world’s richest person.

Such is his fortune that his divorce may mint yet another centibillionaire one day. Scott was ranked as the 18th-richest person in the world, with a net worth of $61 billion, bigger than the GDP of Croatia or Uruguay.

By Surveillance Ghana
3 Mins read
As people everywhere ramp up their usage of instant messaging, more and more are choosing ayoba. MTN Group is proud to partner…
BusinessCovid-19News