Constituency executives of the opposition National Democratic Congress (NDC) in Navrongo Central in the Upper East Region have called on members of the New Patriotic Party to vote against their Member of Parliament, Joseph Kofi Adda.

According to the NDC, the MP has not prioritized the development of the area.

The NDC constituency executives also accused the MP of abuse of power and profligacy.

They also accused Kofi Adda who doubles as the Minister of Aviation of flying in a helicopter to file his nomination forms in the constituency to contest in the NPP’s upcoming parliamentary primaries.

“Most of our people are suffering. We have a lot of people who cannot pay their fees at the universities, a lot of people who cannot have portable water and you have somebody who claims to be a representative of the people. Just because he is coming to submit his forms he is using a military chopper. It is so sad for our people. Instead of concentrating on providing projects that will ennui to the benefit of the people, he is rather showing his extravagance and profligacy that people are very angry with him.”

He added that “We are not happy with him. There are just signs of an era that is coming to an end. He has been in Parliament for more than 12 years and is still seeking to come back to represent the people for another four years. This shows that our people are not well represented and come 2020, Kofi Adda shall be shown the exit.”

But the NPP’s Navrongo Central Constituency Chairman, Mensah Kofi Anthony said the legislator did no wrong if the helicopter was not rented for his trip to Navrongo. 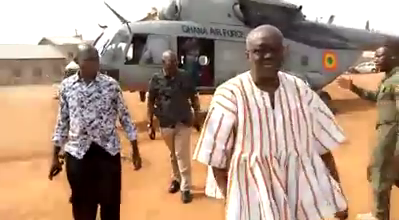 “It was after Kofi Adda finished filing his nomination forms that I realized he came with a military helicopter…Possibly it may have been a free ride to the North. Maybe the military chopper was already coming to the North to do something that he joined.”

“But if actually he paid for the military helicopter to have come to Navrongo to fill his nominations forms, I don’t think it’s appropriate but now that he is looking for power, he may do everything to see whether he will get his votes. It may be one of his strategies,” the NPP constituency chairman added.

When Citi News contacted the MP for his reaction on the matter, he said, he was in Parliament and could
only speak on the matter after his parliamentary business.

I want to be like Kwame Nkrumah – Sam Jonah

1 Mins read
Business mogul and statesman, Sir Sam E. Jonah, says if he was to get the opportunity to be President of Ghana, he would…
EconomyPolitics
1 Mins read
The Executive Director of Africa Education Watch has indicated that the Government of Ghana since January this year has been feeding the…
Covid-19EnergyPoliticsSustainabilitywater

2 Mins read
information Minister, Kojo Oppong Nkrumah has indicated that Ghanaians will have to pay for the free provision of water and electricity introduced…