He said he could not agree more with the assertion by Vice President Dr Mahamudu Bawumia who was then the running mate of the governing New Patriotic Party (NPP) that the exchange rate will expose governments when the fundamentals are weak.

KSM said Dr Bawumia was wrong to have treated the cedi depreciation as an NDC problem, when indeed, it was affecting all Ghanaians.

Dr Bawumia has come under criticisms for failing to stabilise the cedi as he promised to do when he was in opposition.

In a tweet KSM said, “When the fundamentals are weak, the exchange rate will expose you. I agree 100% with Bawumia. His mistake was to treat this as an NDC problem instead of a NATIONAL crisis. As a nation we have WEAK economic fundamentals and the Cedi free fall will not stop now”. 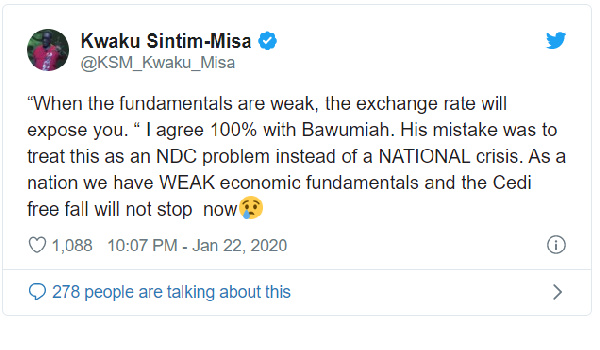 6 Mins read
Sex for fish, a reality fuelled by growing economic hardships in Ghanaian fishing communities The struggle for fish to escape poverty and…
EconomylocalNews