You need to learn to love failure. Yes, failure is actually an integral part of success.

Failure is a double-edged sword. It holds people back from living their dreams and the reason people stay at jobs they hate. They are scared of failing if they leave.

The word “failure” has a such a negative connotation, probably from our education system. If you fail in school then you are a”failure.” But in reality, failure is the key to achieving massive success in any area of your life.

It’s time to understand that failure is an asset and if used correctly, can catapult you to massive success. No one knows this better than one of the most successful actors in Hollywood, Will Smith. He talks passionately about how to use failure to become successful.

Successful People Fail The Most

Successful people understand that failure is the reason for their success. They didn’t think of failure as a bad thing but instead a way to learn and improve.

This Will Smith quote says it best, “You know, when you go to the gym and you work out, you’re actually seeking failure, you want to take your muscles to the point where you get to failure, because that’s where the adaptation is, that’s where growth is.”

Use this mentality and actively seek out failure in your life. Fail big and fail often but make sure you learn from every “failure.” The more you learn the more likely you will be able to carry your wisdom and lessons into the future.

Successful people are admired by the masses. It’s so easy to see people like Will Smith,  top athletes or millionaires and think they just became successful without failure. But that’s just not the case. If anything, successful people failed MORE than most people. 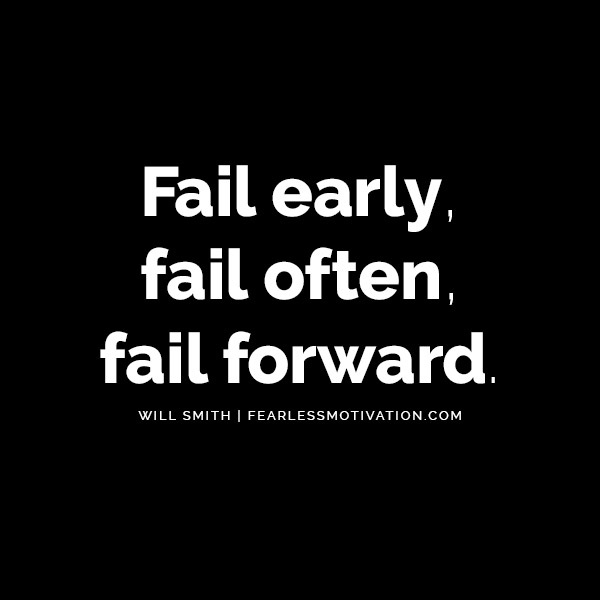 Once you understand that successful people failed more than everyone else you need to start doing the same. Start actively seeking out opportunities for you to “fail” at.

Get out of your comfort zone as often as possible. The more comfortable you get being uncomfortable the more you fail and learn. Like Will Smith noted, “Practice is controlled failure, you’re getting to your limit (…) You can’t live that, you can’t do that, until you get to the point that all of a sudden your body makes the adjustment and then you can do it.”

Push yourself to fail as often as possible in the pursuit of your own greatness. You will learn more than you ever will from trying to play it safe. If you want to achieve greatness in any area of your life you have to be willing to take chances. Learn to bet on yourself and the Universe will greatly reward you.

Remember, “You have to live at the edge of your capabilities. You gotta live where you’re almost certain you’re going to fail.” -Will Smith

Learn to Love Failure Will Smith

1 Mins read
YOUR DESIRE FOR SUCCESS WILL ALSO ATTRACT MANY INCREDIBLE CHALLENGES. IN EVERY CHALLENGE THERE IS A LESSON AND AN OPPORTUNITY. BE PREPARED…
MotivationReflections on Adinkra

2 Mins read
YOU CAN DO MORE THAN YOU THINK. BE AGILE. You create your doubts. You have no reason to doubt who you are….
MotivationReflections on Adinkra